Soake is located in the county of Hampshire, South East England, two miles south-west of the town of Horndean, seven miles north of the major city of Portsmouth, and 59 miles south-west of London. Soake lies four miles west of the West Sussex border. Soake falls within the district council of Winchester, under the county council of Hampshire. It is in the PO7 postcode district. The post town for Soake is Waterlooville. 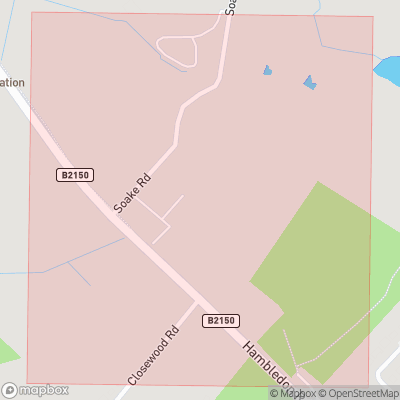 Which county is Soake in?

Where is Soake in Hampshire?

What is the postcode for Soake?

The nearest postcode to the centre of Soake is PO7 6QX.

Where is Soake in PO7?

Location of Soake within PO7

What is the latitude and longitude of Soake?

What is the easting and northing of Soake?

The centre of Soake is located at the grid reference easting 466743 and northing 110982 within the British National Grid (OSGB36) system.

What are the nearest towns to Soake?

What are the nearest cities to Soake?

40m
Soake is 40 miles west of Brighton and Hove

58m
Soake is 58 miles south-west of City of Westminster

60m
Soake is 60 miles south-west of City of London